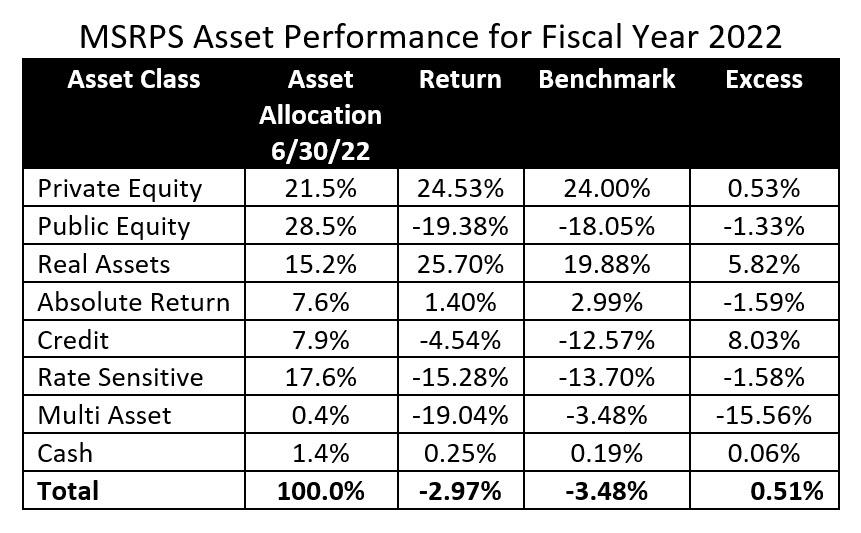 Baltimore, MD (August 16, 2022) — The Board of Trustees of the Maryland State Retirement and Pension System (MSRPS) confirmed today that the System generated a modestly negative return of -2.97%, net of fees, for the fiscal year ending June 30, 2022, beating its policy benchmark of -3.48%. The System’s diversified and risk-balanced asset allocation, designed to weather extremes in market volatility, performed significantly better than a traditional 60/40 allocation to publicly traded stocks and bonds, saving more than $5 billion on its investments for the fiscal year that ended June 30, 2022.

The fiscal year 2022 returns reflect the impact of the ongoing volatility of global financial markets impacted by inflation, rising interest rates, the COVID-19 pandemic, and the war in Ukraine. Recent market activity has been marked by a reversal in the long-term relationship between stocks and bonds. Typically, bond returns have provided a cushion to offset weak stock performance. In fiscal year 2022, stocks and bonds were both down more than ten percent. The System’s asset allocation generated outperformance representing over $5 billion in savings compared to a 60/40 implementation.

“It was a difficult fiscal year for public markets with both bond and stock prices falling, said Andrew C. Palmer, Chief Investment Officer. “The Board’s diversified asset allocation policy anticipates unusual markets such as these and includes stabilizing assets classes to protect value. For fiscal year 2022, alternative assets were able to produce positive returns and help the System outperform its benchmark, further preserving value. While the fiscal year did not achieve the assumed actuarial rate of 6.8%, the 3-, 5- and 10-year returns of 8.4%, 7.9% and 7.8% respectively exceeded expectations and, along with consistent contributions from the sponsors, have significantly improved the funded status of the System.”

“As you would expect, given recent market conditions, investment returns are down from last year,” said State Comptroller Peter Franchot, Chair of the Maryland State Retirement and Pension System Board of Trustees. “However, the System’s assets have held up better than most public plan peers. For the one-year ending June 30, 2022, the System’s net return of -2.97% ranked in the 14th percentile among a universe of 64 peer plans, meaning the System outperformed 86% of the group.”

This item appears in

Back
This item appears in: